U.S. Government Required Disclaimer - Commodity Futures Trading Commission Futures and Options trading has large potential rewards, but also large potential risk. You must be aware of the risks and be willing to accept them in order to invest in the futures and options markets. Don't trade with money you can't afford to lose. This is neither a solicitation nor an offer to Buy/Sell futures or options. No representation is being made that any account will or is likely to achieve profits or losses similar to those discussed on this web site. The past performance of any trading system or methodology is not necessarily indicative of future results.

At certain times including but not limited to Contest, Educational webinars, strategy and methodology building and testing. Simulated trading or Sim Trading could be applied and used.

The Portfolio is a widget that tracks current live and simulated trades. It is manually updated and subject to human error. It is placed on the site to aid in the testing and performance tracking of the methodolgy used. It should not be used to determine current valuation of portfolio owner.

CFTC RULE 4.41 - HYPOTHETICAL OR SIMULATED PERFORMANCE RESULTS HAVE CERTAIN LIMITATIONS. UNLIKE AN ACTUAL PERFORMANCE RECORD, SIMULATED RESULTS DO NOT REPRESENT ACTUAL TRADING. ALSO, SINCE THE TRADES HAVE NOT BEEN EXECUTED, THE RESULTS MAY HAVE UNDER-OR-OVER COMPENSATED FOR THE IMPACT, IF ANY, OF CERTAIN MARKET FACTORS, SUCH AS LACK OF LIQUIDITY. SIMULATED TRADING PROGRAMS IN GENERAL ARE ALSO SUBJECT TO THE FACT THAT THEY ARE DESIGNED WITH THE BENEFIT OF HINDSIGHT. NO REPRESENTATION IS BEING MADE THAT ANY ACCOUNT WILL OR IS LIKELY TO ACHIEVE PROFIT OR LOSSES SIMILAR TO THOSE SHOWN.

This blog author is not an investment advisory service, nor a registered investment advisor or broker-dealer and does not purport to tell or suggest which securities customers should buy or sell for themselves. The blog author may hold positions in the stocks or industries discussed here. You understand and acknowledge that there is a very high degree of risk involved in trading securities. The author assume no responsibility or liability for your trading and investment results. Factual statements on the  website, or in its publications, are made as of the date stated and are subject to change without notice.

It should not be assumed that the methods, techniques, or indicators presented in these products will be profitable or that they will not result in losses. Past results of any individual trader or trading system published are not indicative of future returns by that trader or system, and are not indicative of future returns which be realized by you. In addition, the indicators, strategies, columns, articles and all other features of products (collectively, the "Information") are provided for informational and educational purposes only and should not be construed as investment advice. Examples presented on the blog are for educational purposes only. Such set-ups are not solicitations of any order to buy or sell. Accordingly, you should not rely solely on the Information in making any investment. Rather, you should use the Information only as a starting point for doing additional independent research in order to allow you to form your own opinion regarding investments. You should always check with your licensed financial advisor and tax advisor to determine the suitability of any investment.
Posted by Hector R. Madrid at 10:15 AM No comments:

Today market was surprisingly sold, it came to my attention a stock, Bank of America (BAC), down 6% and counting, this fall seemed originally an overreaction by the investors who punished it for not meeting the earnings estimate by 2 cents. But, when taking a look at the sectors, banking, materials, healthcare, technology, basic materials, services, etc. it was a bloody Wednesday. SP500 (SPY) is down 2.88, 1.8% and going down. Mayor market movers are going down, and Apple (APPL) is hitting $400 per share, the old Steve Jobs era saying "I'd buy it if it's shiny and made by Apple" seems to not to be so valid today. 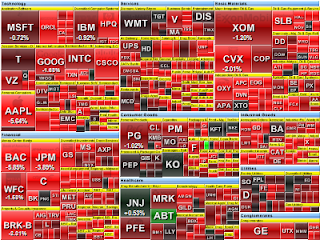 There were some earnings reports, Goldman Sachs was severely punched yesterday after an amazing earnings report.  Normally it's the other way around, but the market thought that it made sense to apply the rule, if something is too good to be true, then it means it's too good to be true, and the argument was that those were signs seen before the house bubble in 2008.  So many people decided to go to the sidelines and see what happens.
This is a massive stampede where the indexes are going down, and where the only happy people are the pessimists who decided to go short on time.
The recent events in Boston, the suspicious packets found, and the generalized growing psychosis are starting to pay its toll.
For a while it has been speculated that SP500 will go down since it has reached top values since before the recession, now, the good question, considering it has failed to catch up with the uptrend channel, this could be the first sign of exhaustion, and eventually a market pullback.  Gold has hit new lows, so it starts to become a commodity to consider for runners.
The factors to consider today are, is this a day when investors simply take utilities? or A major index correction take place after the euphoria seen for the last few weeks?
Probably sticking to the stop levels, going to the sidelines, or short and wait for signs of recovery is a wise decision at this time.

Remember to Read the Disclaimer.
Posted by Hector R. Madrid at 9:57 AM No comments: